When TechSmith rolled out new features for the 2019 release of its award-winning screen capture and screen recording software Snagit, it wanted to make sure users recognized the value of the upgrade and moved to quickly adopt it. It knew that the enhancements would appeal to customers who were users of related functionality in the previous version, and it needed a way to target those users with relevant education and offers to upgrade.

Using anonymous data from Revulytics Usage Intelligence, it identified specific profiles of use and pushed targeted content about the new functionality directly to users by coupling usage data with ReachOut in-application messaging software. Users would see, for instance, an in-app banner with an embedded thumbnail video. When they clicked on that, they’d see Daniel Foster, Snagit Strategy Lead for TechSmith Corporation, talking about the latest functionality. They were then offered a customized call to action to purchase the upgrade.

It’s an example of the types of data-driven strategies that TechSmith has been able to execute since it integrated Revulytics Usage Intelligence software into Snagit and Camtasia (its all-in-one screen recorder and video editor) in 2014. TechSmith has used Revulytics in all versions since — driving benefits throughout the organization, and, above all, for its more than 30 million users in over 180 countries who rely on TechSmith software.

Revulytics recently had the opportunity to speak with TechSmith’s Foster, who has nearly two decades of experience in the industry and is now responsible for product direction and strategy, about how they company is leveraging usage intelligence in its product development and delivery strategy.

Why is it important to not only ship viable features, but to see how they’re being used in practice?

Shipping features is only half our job. The other half is to help users connect with the value those features deliver. Who’s using them? How often? How do we invest to improve them? We’d been in market with Snagit for 28 years. Should we pull some features to keep the user’s experience manageable?

If users don’t discover that value or fail to take advantage of it, we’ve failed.

I understand that initially TechSmith built its own data collection system for Snagit and Camtasia. Why didn’t that work as you intended it to?

That system contained no reporting or analytics, frustrating product teams and the technical professionals tasked with operating and maintaining it. Whenever we had a question our product teams had to ask a developer to stop work and write a SQL query. So we had to make sure it was a really important question. We couldn’t poke around and discover new questions.

Meanwhile, the IT organization was burdened with the effort and cost associated with maintaining servers to capture and store all the data being generated.

Can you give us an example of what you’re able to measure now with Usage Intelligence that you couldn’t before, and what the impact is?

Now we can give wide exposure in the product UI and in-product messaging to broad, daily use features while exposing more niche or occasional-use features to the right users at the right time. We’re beginning to use Revulytics to understand users’ paths through the software, and discover the sequences of tasks they tend to perform together with the goal of supporting users’ primary and secondary workflows and to make sure they don’t slow them down.

How has Usage Intelligence helped you build out a relevant and valuable product feature your team might otherwise not have?

There was skepticism about the value of investments in delivering video functionality to Snagit customers, our industry leading solution for screen image capture and editing.

Revulytics analytics proved that a significant and growing number of customers were using the video features. This insight helped convince the team to add webcam support in Snagit 13, and more robust video features since.

A key strategy has been to reach out to newer users in a company by leveraging in-app messaging. Can you tell us how that has helped drive licensing revenue?

When anyone in a company can use your product, procurement people want to know how many people actually do use it. Revulytics helps us drive that number as high as we can. That way, if they’re looking for expenses to cut, they look elsewhere.

Have the benefits of usage intelligence extended beyond product management?

Using Revulytics, we can even set team goals around specific usage metrics. That galvanizes people from marketing, support, documentation, and development to work together on hitting our targets. Revulytics helps us drive coordinated effort on the customer’s behalf. Revulytics has worked itself into the DNA of our decision-making. Whenever we think ‘wouldn’t it be nice if we knew how much people are using this,’ we just go look. 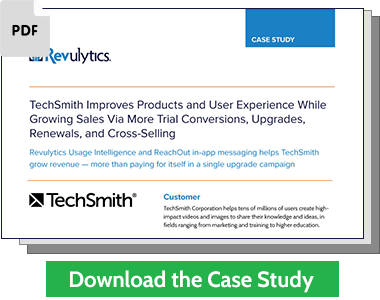 Get Started with Usage Analytics

Register a free account, integrate the SDK (<30 min), and start your free trial.

Keith is Revulytics’ VP, Software Analytics and was the co-founder and CEO of Trackerbird Software Analytics before the company was acquired by Revulytics in 2016. Following the acquisition, Keith joined the Revulytics team and is now responsible for the strategic direction and growth of the Usage Analytics business within the company. Prior to founding Trackerbird, Keith held senior product roles at GFI Software where he was responsible for the product roadmap and revenue growth for various security products in the company's portfolio. Keith also brings with him 10 years of IT consultancy experience in the SMB space. Keith has a Masters in Computer Science from the University of Malta, specializing in high performance computing.

No one likes to be audited. On its own, the word “audit” implies wrongdoing or, at the least, carelessness. Opening the books ...

What Is User Retention?